Thanks to all that have helped!!!

Failure is not an Option!

I'm less than a week away from orientation and getting back on the ambulance. I'm 15 months from the fall that set this path in motion and only been on my prosthetic for 7 months. I've been told that while in the ER I was told not to worry, I'd be back to work in no time. This was to placate me and keep me from worrying while I was healing. Then was told I could go back to work with the prosthetic in order to give me a goal to keep pushing forward. All the while, most people doubting it was possible. More frustrating was a former "boss" more concerned with either breaking me if I did succeed or trying to force me out by saying I'm incapable. To him personally I say thank you. This is the motivation I need to not only have the strength to try to return, but to succeed beyond what I thought was possible.

I'm not delusional. I know I'm charting into unknown territory. This unknown is a first for my new employer and for this region. I am expecting to have to learn quick and live up to one of my favorite sayings...Adapt and Overcome. I know I will have to adapt my technique but I have regained something most of us in the Public Safety world have lost...passion. I am more driven to succeed now than ever before. I have too many people watching me to fail. I am a example to 2 (3 on January 2) wonderful sons, I have had the pleasure of inspiring people I've never met through this blog, and I have the handful who are hoping I fail because they said it would happen. Part of me wants to smash this in their faces and say look at me now. I'm the "gimp" you said was finished, yet instead of airing dirty laundry, I will simply move on and show my sons how to not only have dignity, but also to have integrity.

I hope for big things from this job. This is the new springboard for my life. I am walking proof that nothing can impede determination and that can carry you further than you (or those around you) expect.

Can't wait to fill you in on my first shift. Until next time

Great News!!!! The Prosthetic Medic will ride again! I'll be starting my new position on October 29th, of course I have orientation and classroom stuff to get through before I get back in the ambulance, but just the prospect of being back where I belong makes me feel like I'm about to start a new school.

There are several opportunities outside of being a street medic at this service that I'm very excited to possibly branch out into. That's all for tonight. Busy day tomorrow at the Prosthetic Medic household. Kate's cardiology appointment is tomorrow so we find out what the plan of action for correcting the hole in her heart. For those out there that believe in a higher power please send some prayers/goodvibes/thoughts in our direction. They have set the C-Section date for Liam on January 2, 2013 so for now that's our goal. Keep him baking until then, unless the cardiologist has other plans for us.

I'll update some more in a few days.

Tomorrow I go for my interview at a local private service ambulance company. While I've been assured that this is a formality and nothing more, I have to admit that I am more than a little nervous about the prospect of getting back on the ambulance again. I am confident that I can do the job, it's just learning to do the job with my new set of obstacles. I'll let everyone know how it goes, if I do get the job then I will be working 24 hour shifts, which is another new playground for me. I've done 10, 12, and 16 hours shifts, so 24 is the next logical step right. I'll have to ask the company how they feel about being mentioned here, as I don't want to go into this by upsetting them off the bat.

On another note, in our personal life we have just found out that the Mrs has been diagnosed with a patent Foramen Ovale. For those who have no idea what that is, it's a hole between the atria of the heart. In itself that isn't too much of an issue, the issue that arose is that she had a TIA on Sunday. So now we are trying to game plan with the cardio docs and OB to find out where we need to go from here and what this means with Liam.

Coming to an Ambulance near you....

Well I have put in an application at a local EMS agency. It's a private service company and they are just as excited for me to start there as I am to be getting back on a truck. I'm also going to be speaking to a personal trainer to finish up the last bit of muscle training and stamina building I need to feel very very comfortable in the back of the truck.

Still having a few problems with the prosthetic, that I'm hoping that will be resolved in the next few days. The knee is still sticking and I'm still waiting on my new foot to be delivered. It seems that it takes a while for Otto Bock to make a size 14 prosthetic foot...this is one of the big foot curses you never are told about!!! No matter...life is moving on and so am I. I'm so excited to attempt this again, I'm still not sure how it's going to turn out, but that's what makes it so promising.

Until next time
Posted by Prosthetic Medic at 21:51 1 comment:

A month or so ago I let you all know I would be shooting a commercial for Otto Bock...well here is the final result, along with some photo's from that shoot. 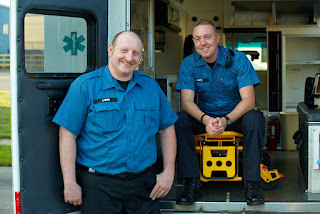 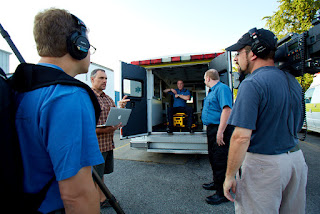 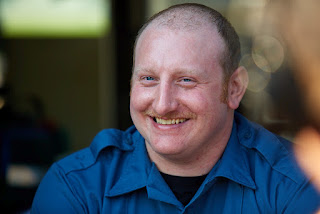 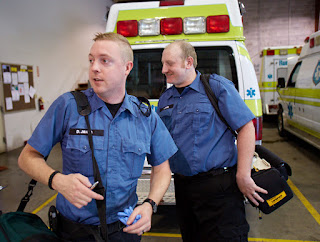 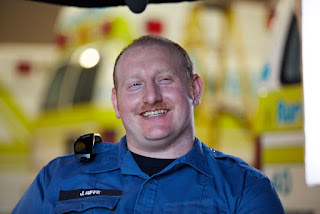 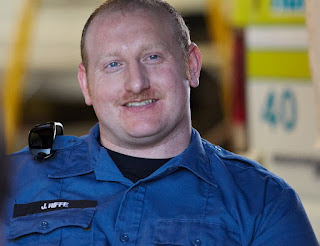 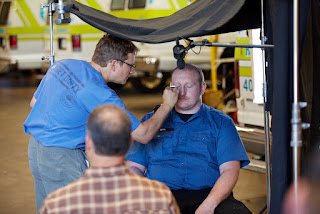 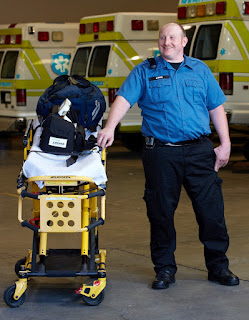 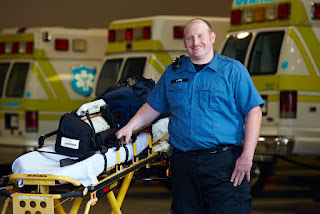 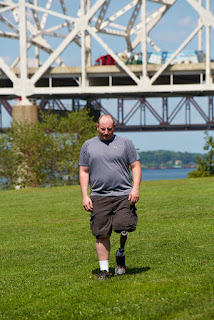 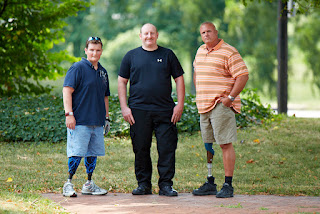 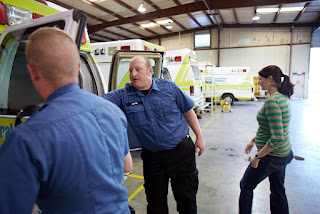 Posted by Prosthetic Medic at 22:48 No comments:

Prosthetic Medic
Welcome to the Prosthetic Medic Blog. Back in May 2011 I fell 110ft and after many surgeries I made the decision to have my leg amputated. This allowed me to return to work as a paramedic. Since returning to work I now focus my time on Amputee Right Advocacy and Activism, Motivational Speaking, Writing a Book, and helping new and old amputees see what can be possible if we only try.