Thanks to all that have helped!!!


If you missed it, above is the link to my Ignite Speech and QA at Stanford Medicine X's School for Design Course. David Ruthven and I had the opportunity to speak about Designing for the Physical Environment. I focused my ignite speech on Prosthetic design. The biggest problem is lack of Patient Centered Designs. For a refresher:

Patient Centered Designs are generally customizable and retain some patient individuality. In the Prosthetic world you need to look no further than the Socket. The patient interface that connects to the prosthesis itself. These are designed for each patient, molded to fit their limb, and often some form of individual design added to make it feel like "mine." As an example:

This is my first socket. Notice the "Jackass Jolly Roger" a great way to individualize a socket 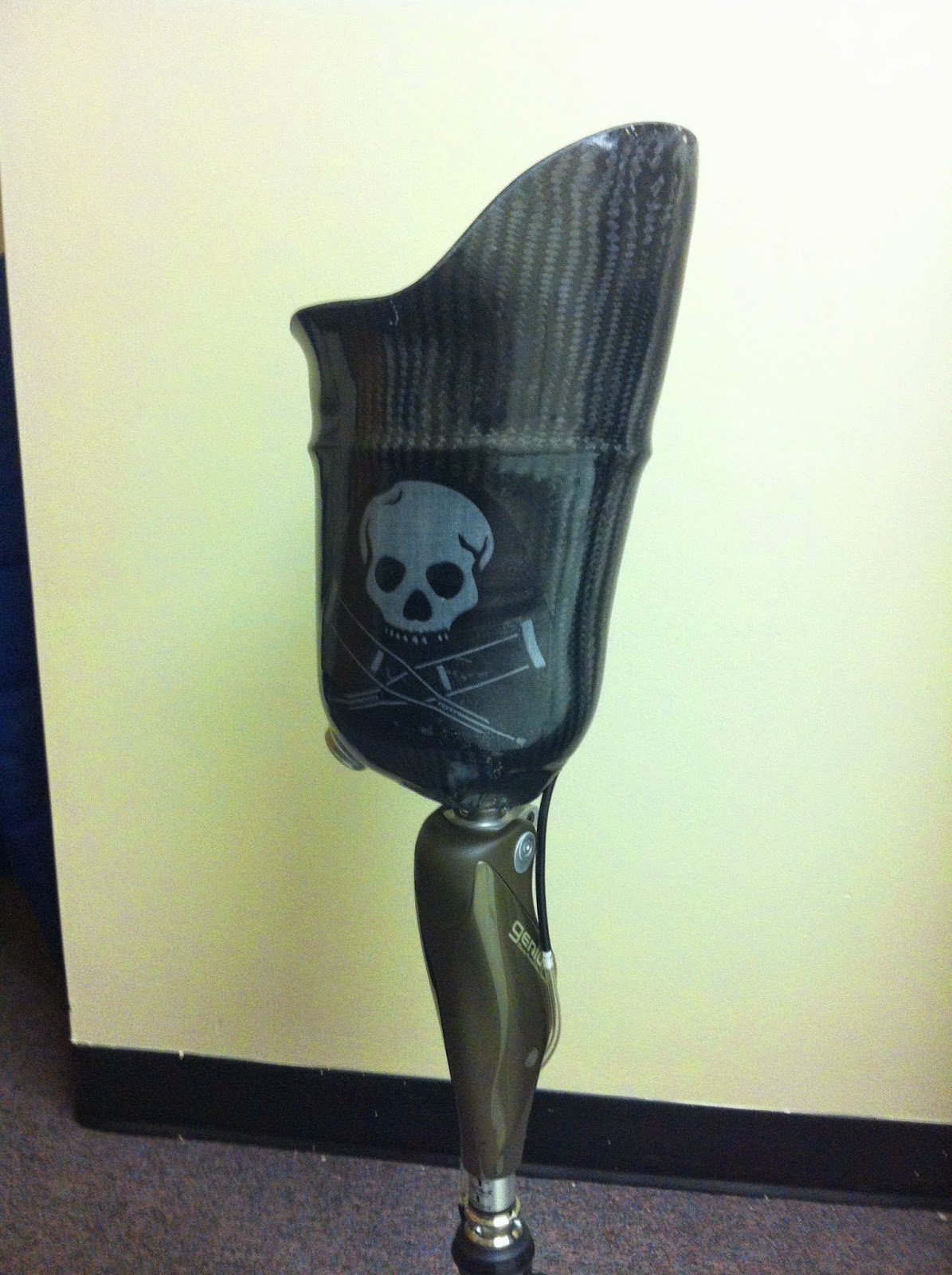 In Contrast, the prosthetic itself is a cookie cutter design that is the same for each patient. No options on colors or exterior design. Otto Bock has helped with making the individual settings customizable to speed up or slow down, add resistance or take it away, or preset settings for specific sports and activities. However, for appearance you, have no options.

Until Now...I was forced to eat my words by the guys at Digital EFX Wraps
( http://www.digitalefxwraps.com )
They have taken the idea of wrapping a car with a vinyl design and applied to prosthetics. I am the second person to have the opportunity to have my prosthetic customized to a design I chose. I went for an Industrial/Steampunk look. It fits my personality...the great part is they can do anything. I've already been dreaming up my next cover, probably a mixture of anatomy and machine. 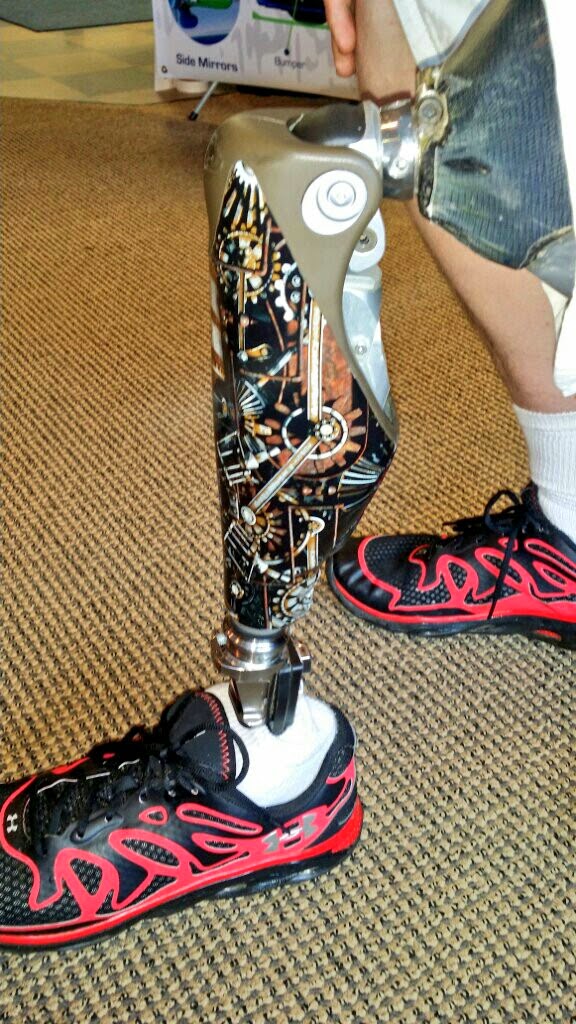 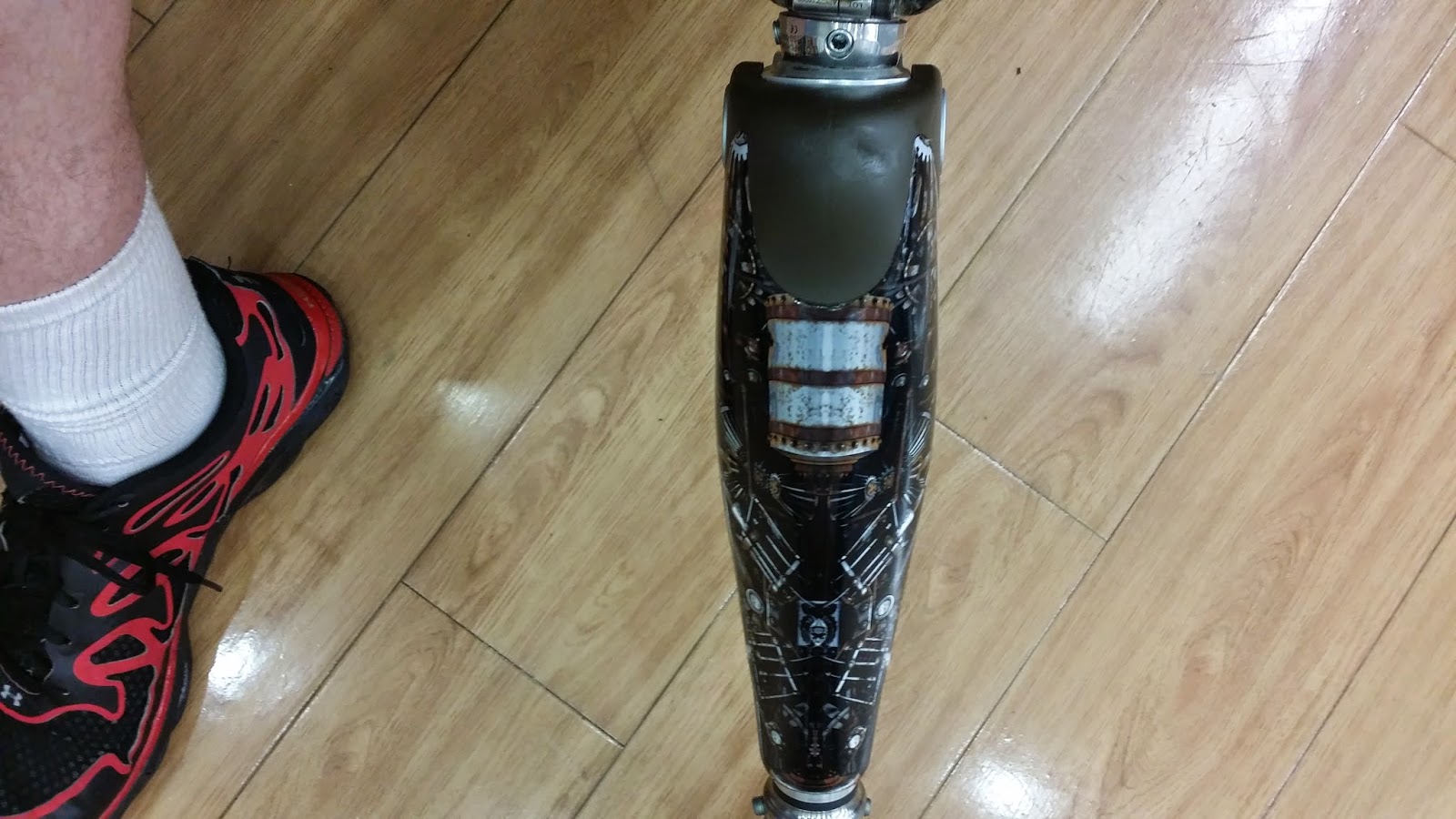 I'm so excited at what this will do for amputees and bringing amputation to the forefront of peoples minds. I love that my prosthetic is a piece of art. Let me know what you think. If you want one...message me and I'll get you in contact with Dallas at Digital EFX. Lets get this viral...spread the word!!!
Posted by Prosthetic Medic at 20:59 1 comment:

Dancing with the Amputee Star...

I've avoided watching Dancing with the Stars. I have successfully avoided watching not only this season, but most seasons. Sure, I've seen an episode here and there, but for the most part, I'm simply not interested. That being said, tonight there's not much to watch and I found myself watching Amy Purdy's dance. She was amazing, for those who aren't familiar. Amy Purdy is a Paraolympian Snow Boarder who happens to be a bilateral below knee amputee. What struck me the most was the buildup to her dancing, and her decision to perform the quick-step with her "blades." Blades are the running legs most people are familiar with seeing, and for some reason the image most people associate with prosthetics. 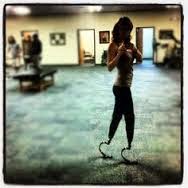 What I noticed is that she had several other pairs of prosthetic feet to choose from, in addition to the running blades. I realize that she is a gold medal winning Olympian and has several sponsors who are willing to pay for these prosthesis. I found myself getting upset. No, not upset, down right mad. Not at Amy Purdy, mind you, at the fact that in order to receive the prosthesis you need to live you have to either 1.)Be independently wealthy, 2.) Be extraordinary and have sponsors who want you to wear their prosthesis, 3.) Fight tooth and nail with insurance companies to "maybe" get a prosthetic...not the best one to let you live life again, no just a prosthetic.

I nearly found myself in the 3rd category, but thanks to those of you who read this blog, and, as I was described by Dr Larry Chu at Stanford Medicine X, being persistently disruptive for a positive change in the amputee community, I was able to pressure an insurance company into covering a prosthetic they deemed "Experimental." By the way, Experimental is an insurance term for prosthetic technology that has been around since the 1990's, being the microprocessor controlled prosthesis. There are nearly 2 million people with some sort of limb loss currently, not everyone of these amputees would benefit from this technology, but for those that would, it is a life changing prosthetic.

Imagine this...for an insurance premium of around 5 cents per person, microprocessor controlled prosthesis would be covered for those who meet the standard. That would be possibly hundreds of thousands of people able to return to a more active lifestyle and many of them would return to work.

Now for contrast, lets apply insurance companies logic to other areas of healthcare. Could you imagine an insurance company denying a pacemaker that a cardiologist wants to implant? How about denying the hardware for a hip replacement? Yes, these happen in rare occasions, but under normal circumstance these devices are implanted and covered. Now, realize that these are also prosthetics. A pacemaker is a prosthetic that assumes the function that the heart has lost the ability to perform, a hip replacement places a prosthetic ball and socket joint that resumes function of a joint that lost it's ability to perform the normal function. Now, why does implantation inside the body make these more important than a hand, knee, ankle, or other prosthetic device? I wish I had an answer...that's why we need Insurance Fairness for Amputees.

I will step down off of my soap box for tonight and hope this has given you something to consider.

Yesterday was the 3 year anniversary of my life changing fall. This week has seen a spike in my anxiety, while it has been rough, it was not unexpected. I have experienced the same problems for the past 2 years, so the increase in symptoms this year, while unexpected, were not preventable. The amazing part was that, on the actual day of the fall, I had a wonderful day. This is due to Kate and I celebrating our 1 year wedding anniversary. We made the decision to change the outlook of that terrible day into a very positive one, and I must say...it worked.

On to the updates,

I had the wonderful opportunity to speak to the Moving Forward Limb Loss support group a few weeks ago. It was a wonderful experience and I look forward to further meetings with those wonderful people. You can watch the speech here Moving Forward Speech

In a few weeks, I will be travelling to Stanford University to speak to the School of Medicine. I will be giving an Ignite! style speech with a power point to back up my points. I will be posting a video of this once it's available.

I am happy to say that, while I'm not where I want to be in life, I am finally optimistic again. It has taken 3 years, but I feel like I'm finally getting back to who I am. I have finally mourned my loss of both my leg and previous identity. I have came out on the other side with a determination I wasn't aware I was capable of...I now understand the battles I have been through will be platform I stand on to help others either get through their battles or avoid them completely.

PM
Posted by Prosthetic Medic at 19:54 No comments:

Prosthetic Medic
Welcome to the Prosthetic Medic Blog. Back in May 2011 I fell 110ft and after many surgeries I made the decision to have my leg amputated. This allowed me to return to work as a paramedic. Since returning to work I now focus my time on Amputee Right Advocacy and Activism, Motivational Speaking, Writing a Book, and helping new and old amputees see what can be possible if we only try.